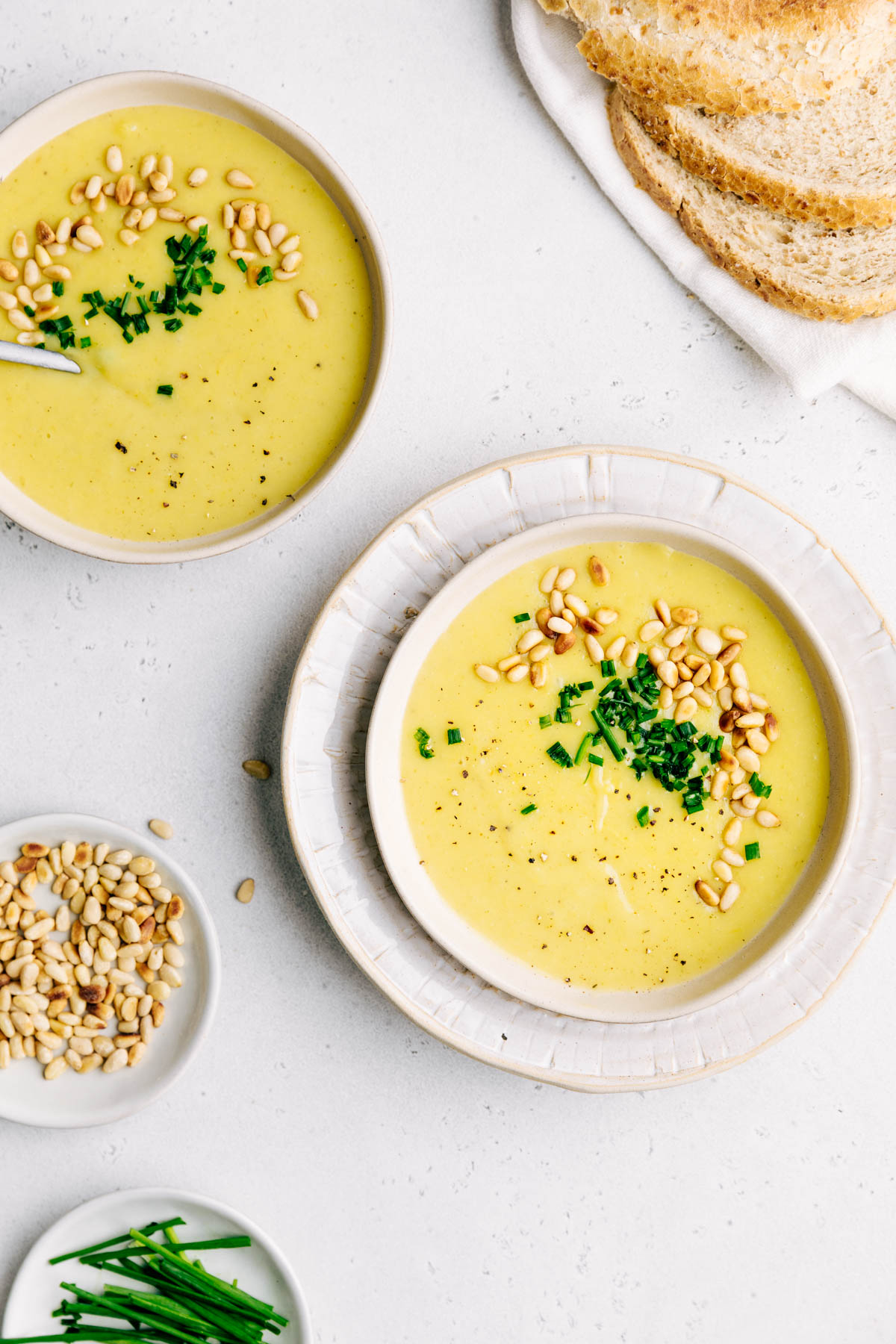 A good creamy soup with potatoes is ideal for getting cozy and warm. This Vegan Potato Leek Soup is a great example of one of those comforting recipes. This recipe is simple and made with wholesome, nourishing ingredients. This soup can be a light lunch or dinner or a nourishing starter.

With the pine nuts and herbs as a topping and a good slice of bread, this potato leek soup is the epitome of a comforting bowl.

Leeks are incredibly versatile. They are great in a stir-fry, in in stews, on pizza, in pasta, as a stuffing, in a tofu crumble or on their own.

Leeks add an ”oniony”, sweet flavor to this soup, so don’t be shy to use them. This soup does not taste like onion, but it has a unique, sweet, and mild onion flavor.

They are related to onions, garlic, chives, and shallots. Their sweet flavor makes them so unique because the combination with sweet and a mild onion taste will add depth to so many recipes, such as this soup.

When shopping for leeks, try to get those with long white and light green stems. You might want to buy a few extra leeks if you can only find leeks with large top green leaves and small white stems.

How To Cut Leeks

Before washing the leeks, I cut off the stringy roots (bottom white) and most of the top (dark green leaves). You can use the top green part, though, so keep those for later to add to stock, for example.

Next, chop the white and light green parts of the leek. You will chop the leeks into half circles, which is perfect for most recipes.

Potato leek soup is a traditional recipe that can also be described as ”cream of leek and potato soup”. This is also known as Vichyssoise (originated in France). If your potato leek soup is cold, you are enjoying Vichyssoise, and if it’s hot it’s a potato leek soup. Both versions of this soup are delicious, but for a cozy and comforting experience, the warm version will be your best option.

For this recipe, you will need 9 simple ingredients and a bit of salt and pepper.

Leeks
Since leeks are related to onions, they have an onion flavor but leeks are milder and sweeter. You can find fresh leeks from (late) winter to late spring and sometimes even early summer.

Celery
Leeks can have a bitter undertone, but salt can counteract the bitterness. I find that celery does the same because of its salty taste and sodium content. While celery has a relatively high salt content for a vegetable, this does not make them a high-sodium food.

Potatoes
Potatoes provide a creamy texture to this soup and a beautifully rich flavor. The blended potatoes will make this soup creamy.

Coconut milk
The coconut milk will further add more creaminess to this soup. Instead, you can use a cup of white beans, a few tablespoons of unsweetened soy yogurt, or any soy-based creamer.

Garlic
Garlic amplifies the earthy-rich flavors. Make sure to dice the garlic before adding it to the soup. The smaller you cut the garlic, the more the sweet notes of the garlic will develop.

Bay leaf
A bay leaf is like an extra layer of flavor to a soup. Consider it a tea; the longer you brew it in the soup, the more the flavor can develop. Remove it before blending the soup.

Thyme
The earthy and minty flavor of thyme pairs well with the overall flavor of this soup.

Olive oil
For the base of this soup, you can use olive oil or vegan butter. For an oil-free recipe, use broth instead to sauté.

Once all ingredients are washed and cut, the soup is pretty much done. All it needs after that is time to simmer.

Step 1.
Wash the leeks and chop into half circles.

Step 2.
In a pot, sauté the olive oil, then add the leeks, garlic, and celery.

Step 3.
Add the potatoes, broth, coconut milk to the pot and let simmer until the potatoes are tender.

Step 4.
Blend until the soup is creamy and serve with toppings such as chopped herbs and roasted pine nuts.

There are endless ways to serve this soup, but I feel it truly needs a topping. Roasted chickpeas with herbs, croutons, or roasted pine nuts are delicious toppings because they add flavor and texture to this creamy soup. Chopped parsley or chopped chives are delicious herbs to use as a topping, but feel free to experiment.

Why you will love this recipe:

What kind of potatoes can I use?
The best potatoes for creamier soups are starchy potatoes, such as Yukon gold or russet potatoes. Yukon gold potatoes are preferred as they are smooth, which means they blend very well. If you use russet, you can still make a delicious soup. Make sure to blend the soup well and let it simmer long enough.

Can I keep this soup for later?
This soup is excellent to make for later. You can keep the soup in the fridge (covered) for at least 3-4 days. Make sure to reheat the soup thoroughly before serving.

Does this soup freeze well?
This soup can be kept in the freezer for about 2-3 months in a jar filled to the rim or an airtight container. After that time the quality of the soup will deteriorate. Heat the soup thoroughly before serving.

Does this soup taste like coconut?
The soup will simmer for at least 20 minutes and will be blended with quite a few ingredients, so the coconut taste can’t really be dominating. But if you are not comfortable using a cup of full-fat coconut milk, you can use light coconut milk, soy milk, a soy-based creamer, unsweetened soy yogurt, or one cup cooked white beans.

If you love soup you might want to check out these soup recipes too:

Wash/cut the leeks
Cut the bottom (root ends), and top dark green (hard) leaves off the leeks. Cut the leeks lengthwise in half and separate the layers to be able to wash the leeks under running water until all dirt and sand is washed away.

You will be left with the tender white and light green parts of the leeks. Chop the leeks into half circles.

Sauté
Heat a large pot over medium heat and add the olive oil (or vegan butter or 4 tablespoons of broth). Add the leeks and let simmer for 5 minutes seconds. Add the garlic and let sauté for an extra minute.

Simmer and add flavor
Add the vegetable broth, coconut nut milk, potatoes, salt and pepper, thyme, and bay leaves. Stir well and let come to a boil, then reduce the heat to low/medium and let simmer for about 20-30 minutes until the potatoes are tender.

Creamy
The soup is ready to be served when it’s super smooth, but you might enjoy a soup with some potato and leek chunks for a little texture. If you don’t want your soup to be super creamy, blend only ½ or ¼ of the soup.

Serve
When the soup is ready to be served taste it before serving and add more salt or pepper if you wish. Serve warm and top with your preferred toppings. I would suggest roasted pine nuts with chopped chives. But chopped parsley, roasted chickpeas, tempeh, or croutons are also a delicious topping. 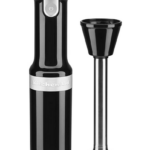 Make this recipe oil-free by using 4 tablespoons of broth instead of olive oil or vegan butter.

You can keep this soup in the fridge (covered) for at least 3-4 days. Or keep in the freezer for 2-3 months in a jar filled to the rim or an airtight container. After that, the quality of the soup will deteriorate. Heat the soup thoroughly before serving. 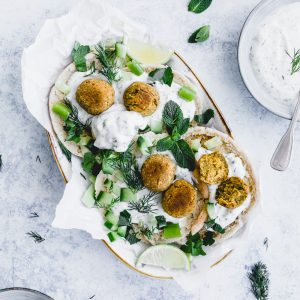 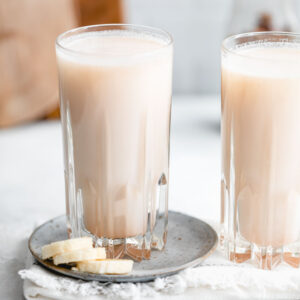 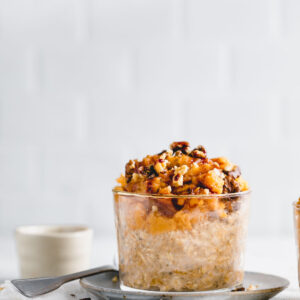